Achievments for 4e - An Assessment

Back in January, I posted about using In Game and Out of Game Achievement cards for 4e DnD.

Well, when the Dead Orcs Society had their game last Saturday, I finally got to hand out and implement the completed Achievement Cards.  Here's how that went...

When first handed out, the Achievement Cards were received with a general mix of confused bemusement.  Well, with the exception of my wife, of course (who I had previewed the cards with).  I think the number of cards were a little overwhelming, but as they looked at them, the players began to like the idea.

They were a little concerned that they wouldn't be able to meet every achievement.  I told them, that's the reason I created so many.  That way, everyone would have the opportunity to turn in some.  Since the cards are only appropriate for the Heroic tier, I told them they'd have until 11th level to turn them in.  I also prepared them for the fact that the Paragon Achievement Cards would have more difficult tasks on them.

There was only one small drawback to the cards, one that was foretold by Swordgleam in a comment on my original post.  Some of the achievements were way too easy.  I'm okay with that, though, as many of my players noted that some of the achievements were pretty difficult.  One example:  I have an achievement that can only be gained if a player avoids any talk about World of Warcraft or other Out of Game hobby.  Yeah...that was an automatic fail for about half of my players.

Finally, I have to give MadBrew props for suggesting that I use other rewards (beyond XP) for the achievements.  To that end, I believe I'll create a "deck" of rewards that a player can draw from.  Some might be XP, some might be Action Points, some might be the free use of a one-time Encounter Power, that kind of thing.  I'll post more about that idea another time.

Oh, in case you're wondering, here's what my Achievement Cards looked like: 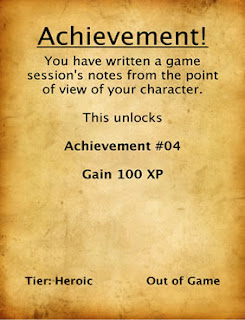 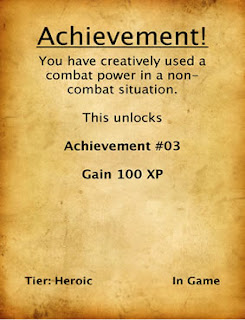 Game excellently with one another.
Posted by R.M. Walker at 9:31 AM 3 comments: Links to this post

Coegi Has A Bad Dream

From time to time, I like to share the fictional pieces I do for my characters.  This piece is a dream that Coegi (Storm Sorcerer) had after a particularly lengthy battle.

Everything Must Go!! (Now Accepting Your Orders)


This is the first time I've done something like this, but here's the deal.  I'm trying to get a little extra money stashed away for the wife and I's trip to Savannah, GA in late April.  To that end, I started to look at some of the old DnD stuff that I have lying around, and thought that maybe some of the older edition stuff might sell.  The books I'm selling are in pretty good condition (some worn edges on covers).  I wouldn't sell anything I wouldn't buy myself.


First - Pick out the items you want to buy and place a comment below this post indicating those items.  This "reserves" your purchase and lets others know if something has already been reserved.  Then, total the amount of your purchase.


Second - Click the "Donate" button you see up there on the left-hand side of the page.  Enter the total amount of the items you want to order.  Place your order.  You may use your PayPal account or a credit/debit card.


Third - Send me an email at deadorcswalker@gmail.com  with the names of the items you're purchasing.  I'll match them with the amount donated, place the items aside, and then ship them out to you.  As items are sold, I'll remove them from the list you see on this page.

UPDATE!   I have lowered the prices on the 1st and 2nd edition stuff after a number of comments to the effect of "you're priced out of range".  Understood.  However, that said; I can no longer cover shipping and handling.  If you wish for me to send your stuff priority (which I'm happy to do).  I'd ask that you include $10 for the first book, and $2.50 for each additional book.  I know that sounds pricey, but have you mailed a parcel lately?  In case you're wondering, I've done some looking, and UPS ground isn't any cheaper.


The prices are fixed.  I'm not a collector, and I haven't consulted any tomes that claim to know the value of such things.  Most of these books were collected since I became an adult.  Since I worked in a bookstore for a number of years, I've had a tendency to take very good care of my books.  They're not in pristine "plastic-wrapped" condition, but they are (for the most part) in good usable condition.  Where some significant flaw is apparent, I've tried to make note of it.


Everything is on a first come/first server basis.  Sales are final on these, so caveat emptor.  I'm not out to gouge anyone, just trying to get rid of these books that really aren't seeing any use anymore.


Game excellently with one another...
--
Are you prepared?  Ask me how you can prepare for the upcoming zombie apocalypse!
Posted by R.M. Walker at 8:38 PM 3 comments: Links to this post